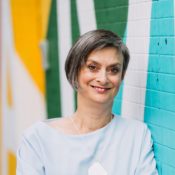 Helga Hertsig-Lavocah wanted to be a forensic scientist, but lacked the patience to perform lab work, so now she tracks down trends (instead of criminals). She’s been freelancing since 2004, before that she worked at a fragrance house and in advertising.

Helga grew up in England, is half Danish, part many nationalities including French, Portuguese and Indian. She lived in the Netherlands for 24 years, and is now based in Dublin, Ireland.

This mix of passions, education and cultures is the perfect basis for a futurologist – trend forecaster: open minded, curious and never settled, yet grounded in the reality of fmcg.

She supports multinationals in food and non-food in their innovation process, with idea and concept generation